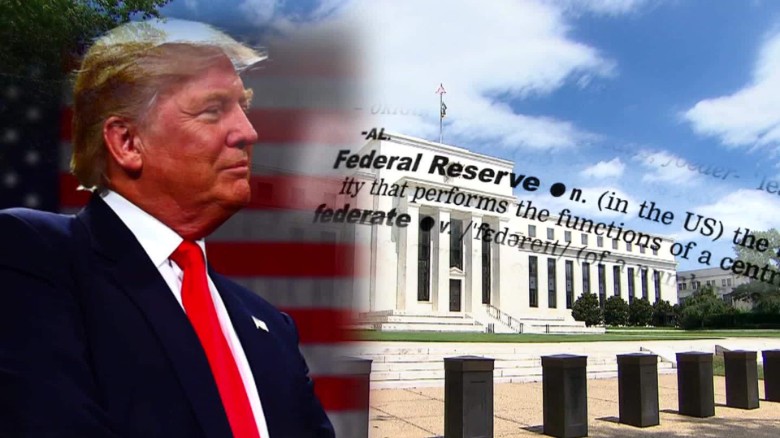 The US President, Trump, claimed that the Fed Slashed them down badly in terms of economic growth, as there’s no inflation. “I think the Fed must drop the rates down and loosen it quantitatively. You would see a rocket ship”, said Mr.Trump.

The Fed has continuously been raising the interest rates- four times since Jerome Powell stepped as chairman in February last year.

Although, Mr. Powell was appointed by Mr. Trump the US President has often criticized the Fed chairman for increasing rates.

As per The Wall Street Journal report, earlier this week Mr. Trump told Mr. Powell in a recent phone call: “I guess I’m stuck with you”.

Further twice increase in the interest rate by the Fed is forecasted.

However, Fed replied saying, now we are taking a “patient approach” to interest rates.

Mr. Trump about the next Fed Chairman nominations Also, Mr. Trump, earlier this week said, that he would nominate the former boss of Godfather’s Pizza to the Fed’s board of governors.

The 73-old-year, Herman Cain, is a former chairman of the Federal Reserve Bank of Kansas City.

Apart from Mr. Herman Cain, Mr. Trump also plans to nominate Stephen Moore, who advised the president during his election campaign, to join the Fed’s board of governors.

Analysis of the President’s choices picks of Herman Cain and Stephen Moore to the Federal Reserve’s Board of Governors shows that Mr.Trump is politicizing America’s central bank.

Well, their candidacy holds for a shift from the president’s first few nominees to America’s central bank. The duo were more traditional candidates and was more or less greeted with bipartisan approval.

Still, Cain and Moore appear to have been picked mostly for their loyalty rather than their experience to the President and have therefore provoked a great deal of political criticism.

As, Donald Trump openly has been critical of recent Fed policy, heckling Fed Chairman Jerome Powell on Twitter.Mr. Trump’s only concern with the Fed is to lower interest rates and ease from quantitative tightening.

About the candidates’ Economist, Stephen Moore openly has been critical of the Fed.

While Cain, the former boss of Godfather’s Pizza, who also has worked at the Kansas City Federal Reserve often stated his anachronistic view that the US should return to the gold standard.

If their nominations pass in well, they would be in a position to promote his view that the economy can grow much faster without overheating.

But for investors, it might raise fear about the independence of America’s central bank.JobsAnalysts have been expecting a growth in the new jobs somewhere ranging from 170,000 and 180,000 roles, while the earnings data showed that the annual rate of wage would be slowed down from to 3.4% in February to 3.2% in March.

However, these data won’t change anyone’s thoughts about whether would the Fed ultimately will have to hike this year.

Although the payroll gain is welcome, one month isn’t sufficient to prove whether will the trend remains close to 200,000, and doves will point to the modest average hourly earnings gain as a piece of evidence that the Fed’s ‘patient’ stance is justified.

It was a “mixed report” with highlights including an upwards revision to the 20,000 new jobs initially reported in February.

But the factor of disappointment here is  “The average hourly earnings”.

To be more precise with the report:

The unemployment rate remained at 3.8% for the second consecutive month.

The health care sector experiences jobs rise, but both the retail and manufacturing sectors saw declines.

Also, around 6,000 jobs were lost in manufacturing, the first decline in the sector was in July 2017.

Many car companies are in the notch of cutting thousands of jobs, which includes General Motors -cutting about 14,000 workers.

Elon Musk and SEC told by the court to hold a meeting for atleast an hour to discuss the “Tweet” Saga.
Comment