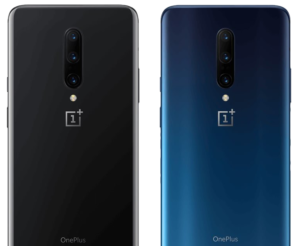 Recently a new leak offered by Ishan Agarwal which are supposed to be the snippets of official marketing materials offers a full-fledged view of the upcoming flagship.

These leaks do confirm the previous rumors about the device and do offer some new details also.

In these leaks, we can have look that there’s no notch and barely it even has any bezels around the display making it look more like Samsung’s last year flagship S9.

On the back the device sports a three camera setup one of which is supposed to be a 48 MP shooter with an f/1.6 aperture along with both EIS and OIS. Other two can be a 16 MP ultrawide shooter offering a 117-degree view is expected and an 8MP telephoto shooter that offering 3X optical zoom respectively.

What else we can observe is a gradient glass back inspired by the likes of Huawei, Honor and Samsung flagships. In this picture, we can see two devices having a blue-ish and black-ish tint basically called as Nebula Blue and Mirror Grey respectively.

The only thing which is missing is a front facing camera and this does confirm a solid rumor of the front-facing shooter being a motorized camera something which we have seen in many Vivo and Oppo smartphones.

Since we are just a few days away from the official launch and see these leaks coming true.